Each year, the FBI’s Criminal Justice Information Services Division selects a Latent “Hit of the Year” and shares details about the case solved when latent prints were identified by a search of the FBI’s Integrated Automated Fingerprint Identification System (IAFIS). Acting Unit Chief Joseph M. Baker of the Latent and Forensic Support Unit presented this year’s award to Trooper Christopher Dolan, Massachusetts State Police, on August 12, 2014, in Springfield, Massachusetts. The details of the case follow.

In the summer of 1983, Rodney Wyman and a co-worker traveled from Connecticut to Malden, Massachusetts, to install windows at a construction site. On the night of August 22, the men were watching television at a hotel in the front bedroom of the suite they were sharing.

After hearing a noise in the back bedroom, Wyman got up to investigate. As he approached the bedroom door, he was fatally shot in the chest. A man entered the front bedroom and pointed a gun at the other individual and brutally attacked him while demanding money from him.

With the second man incapacitated, the intruder began to remove valuables from the room. However, when he tried to move the television, he activated a tamper alarm in the hotel front office, prompting two hotel employees to rush to the room. One of the employees saw a man exit the rear window of the suite and gave chase, but the intruder escaped.

Trooper Brian O’Hara of the Massachusetts State Police’s Crime Scene Services Section (CSSS) initiated the investigation by processing the crime scene. Trooper O’ Hara recovered more than 23 latent fingerprints from the hotel room. Several of the recovered latents were deemed of no value, while others were identified as those of the deceased victim and employees of the hotel. The remaining latent fingerprints were searched against the state’s Automated Fingerprint Identification System (AFIS) but produced no results. Eventually, the case went cold.

In an October 2010 review of cold cases, the Massachusetts State Police requested that the CSSS reassess the latent evidence from the Wyman homicide investigation. Trooper Christopher Dolan, a latent print examiner at the CSSS, was assigned to review the large volume of paperwork and documents processed 27 years prior.

On November 9, 2010, Trooper Dolan searched two latent images collected from the television set against the state AFIS with negative results. Trooper Dolan then prepared the latent images for a search of the FBI’s IAFIS. In less than 10 minutes, the IAFIS returned a response containing possible candidates for comparison purposes. Trooper Dolan examined the latent print evidence and positively identified the prints to the first candidate of the IAFIS response–Shawn Marsh.

Based on this identification, the Massachusetts State Police reopened the case. Investigators located Marsh and requested that he provide Major Case Prints, which resulted in an additional individualization to palm print evidence recovered from the crime scene.

In 1983, the examiners processing the crime scene evidence considered the right and left little fingers of no value. To conserve resources, it was a common practice to exclude them from the repository. The latent print evidence submitted to the IAFIS in 2010, which resulted in a match to Shawn Marsh, was a friction ridge from the left little finger. 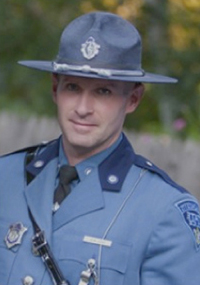 Trooper Dolan began his law enforcement career in 1995 as an intern with the Massachusetts State Police, Crime Scene Unit. Later that year, he was hired as a Latent Print Examiner and worked cold case homicides. After graduating from the State Police Trooper Academy in 2002, he served as a road Trooper, but was later transferred back to the Crime Scene Unit. During his career, Trooper Dolan has compared more than 1 million biometrics, effecting more than 2,000 individualizations.